In The Wicker Man, the 1973 British thriller directed by Robin Hardy, all manner of worlds collide: old world crashes into new world, paganism slams into Christianity, lust rubs suggestively against chastity. I suppose at its core, the film is about conflict. It makes perfect sense that the screenplay was written by noted playwright Anthony Shaffer, known for mysteries that twist and turn upon themselves until you question all you thought you knew—for in The Wicker Man, you can be sure that nothing is as it seems.

Scottish policeman Sgt. Neil Howie (Edward Woodward) has received an anonymous letter informing him of a young girl’s disappearance on a remote island called Summerisle, and The Wicker Man begins as he flies to the island to investigate. Once there, he discovers a quaint village where modern life is trumped by archaic beliefs. Sure, there’s a friendly local pharmacy, but the pharmacist’s accepted cure for your sore throat involves a frog and your mouth. Summerisle’s owner and magistrate is the charismatic Lord Summerisle (Christopher Lee). He’s also the high priest of the pagan cult that is at the center of Summerisle society. Every aspect of the island’s life is tied to an ancient religion that seems to have its roots in Druidism. This is a problem for a devout Christian like Sgt. Howie. The sight of people practicing sex magick and fornicating in public is offensive to him. But when, in the course of his investigation, he finds the island’s young schoolchildren being taught fertility rituals and the phallic symbolism of the maypole, he’s positive he is surrounded by deviance.

While Sgt. Howie is a chaste and pious man, he is only human and his attraction to the innkeeper’s beautiful daughter (Britt Ekland) tests his convictions. She flaunts her sexuality and makes her desire for him quite clear. This leads to a long dark night of the soul for our hero, from which he emerges virtue (barely) intact. Luckily, he has his case to focus on. As he searches for the missing girl, it becomes obvious the whole populace of Summerisle is involved in a plot to cover up her disappearance. The deeper Sgt. Howie delves, the more he’s convinced the girl is to be offered as a human sacrifice at the upcoming May Day festival. As he races against time to locate and save her, the villagers seemingly do all they can to stop him. But has Sgt. Howie become so distracted by his sense of duty that he doesn’t see what’s actually happening? Will Howie’s faith save the day or be the cause of his downfall?

The Wicker Man is considered to be one of the great British horror films, although it’s really more a mystery than a horror flick. Director Robin Hardy’s greatest achievement here is establishing a setting that seems familiar yet foreign, allowing us to experience Sgt. Howie’s disorientation as we follow his journey through the looking glass. Everything works toward making the viewer feel as if Summerisle has been caught in the past—the costumes, settings and performances all feel as if they belong to an age long gone. The film’s effective use of folk music plays a key part in creating this atmosphere. And this being the early ‘70s, there’s more than a hint of “counterculture vs. establishment” at play. 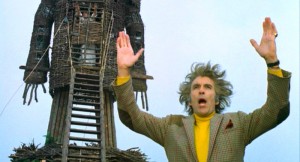 Of course, none of this would work if the actors couldn’t sell it. Edward Woodward makes Sgt. Howie a study in contradictions, communicating viscerally the battle between Howie’s intellect and desire. Britt Ekland’s appearance as the innkeeper’s daughter has received much attention over the years, though it’s hard to appraise her dramatic ability because all her dialogue has been dubbed by another actress. But when she begins her infamous nude dance, she ably fulfills her role as Sgt. Howie’s temptation. Sir Christopher Lee’s portrayal of Lord Summerisle is my favorite performance in the film. Though Lord Summerisle seems to be running the island as his own personal work camp, Lee makes him a charming mod hipster who actually seems to believe the heretical twaddle he spouts, especially when it serves his interests. 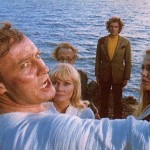 That 1973 was a much different time is driven home brutally by viewing Neil LaBute’s 2006 remake of this flick, starring Nicolas Cage. It’s mystifying that two such different films could be made of the same story. (If you don’t believe me, check out the two vids below.) To watch the original version of The Wicker Man today is to travel back to a bygone era, much like Sgt. Howie does when he lands on Summerisle—but be assured, it’s a trip worth taking.

Please check out Stacie Ponder’s blog, Final Girl, for more on The Wicker Man and other awesome stuff. Spend time there, get to know her, take her home to meet your parents…but whatever you do, don’t try to stifle her need to be free—‘cuz she hates that.