Everyone knows horror is cyclical. We latch onto one monster, wring all we can out of it and move on to the next. These days, it’s vampires—Asian vampire priests, sexy Southern vampires, brooding teen vampires. Just a couple of years ago, it was zombies—slow zombies, fast zombies, droll British zombies. One could say vampires are the new zombies. I suppose I and everyone else thought filmmakers had done everything possible with the zombie trend. But I just received a screener of a film directed by J.T. Seaton called George’s Intervention, and it made me realize we were wrong. There was one very funny angle that hadn’t been explored.

George’s Intervention takes place in a world where zombieism is an accepted part of life. It’s all tidily explained in an elementary education slide show. It seems an unusual celestial event has brought about alien spores that, when inhaled, cause people to come back from the dead. But it’s okay. Like alcoholics, there are high-functioning zombies that can lead productive lives and raise families, just like anyone else—as long as they keep their, ahem, appetites in check.

George (Carlos Larkin) is a nice guy, but he’s a zombie. He likes to think he has it all together, but there’ve been signs. You know, little things: He thinks his ex-girlfriend’s blood makes a nice appetizer; “To Serve Man” is his new favorite episode of The Twilight Zone. Luckily, George has friends and family who care about him. In fact, they care so much that they’ve hired Barbara (Lynn Lowry), a rather inept interventionist who, unfortunately, doesn’t seem to be zombie-certified. They’ve all gathered in George’s house, and they won’t leave until he seeks the help they’re sure he needs. But there’s one thing nobody has thought about: locking yourself up with a hungry zombie, even if he is a loved one, might not be the wisest thing. 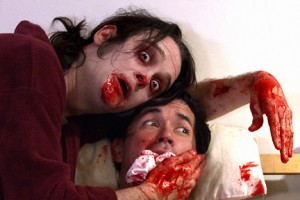 George’s Intervention is like an extremely entertaining piece of candy—part drawing room farce and part murder mystery, all covered in a bloody good zombie coating. The laughs begin subtly but start piling up as fast as the bodies in George’s basement. And George’s friends aren’t the only ones on the menu. People start to drop by to drop dead. Let’s see, there are Mormons, salesmen, neighbors, strippers. I mean, what’s a not-so-highly-functioning zombie to do?

Aside from a witty script by J.T. Seaton and Brad C. Hodson, which gives everyone a chance to shine, one of things that makes George’s Intervention work so well is a fantastic ensemble cast. Every member does good work here. As George’s baking-obsessed sister Francine, Shannon Neil is a prickly delight. Michelle Tomlinson displays deft comic timing as George’s ex, Sarah, who may just have the worst taste in men. Peter Stickles gets to play funny and serious as Ben, George’s best friend. And then there’s George himself. Whether he’s trying to convince his sis that he didn’t eat her date or making us see the humanity of the living dead, Carlos Larkin holds it all together and acquits himself nicely, playing George as a zombie with bad habits. Also, kudos to scene-stealer Vincent Cusimano who plays Roger, a not-at-all functioning alcoholic that is a hero in his own mind, and maybe in real life as well. Even the strippers (played by Victoria De Mare and Angela Landis) are slyly hilarious in their one scene. And cult-film fans should keep their eyes peeled for some cameos from people only they will recognize. 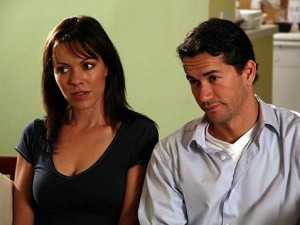 It’s funny—although George is a zombie, he seems much less troubled than the people demanding he needs help. Maybe George’s Intervention is deeper than it seems. Maybe it’s really a message movie, a plea for understanding and tolerance. Nah, who am I kidding. Any flick in which the lead character gnaws off a man’s gore-covered leg is a zombie movie, plain and simple. Any flick in which the zombie then finds reason to beat the man with the gnawed-off leg is a comedy. George’s Intervention allows both to occur, and I ask you: What else could you possibly want from a movie?