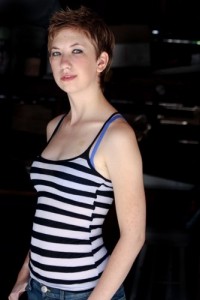 In the meantime, I have a little something to make the wait easier. I’ve been talking to some of the stars of Planet of the Vampire Women, and today I have a quick interview with Liesel Hanson, who plays space pirate Ginger Maldonado. As you’ll soon see, Liesel is a bit of a divine lunatic, which is why she fits in so well at TFO. I hope you enjoy our chat as much as I did.

Hi Liesel, thanks for making time to gab with me. I want to start by welcoming you into the Unusual First Names Club. Liesel is a lovely name. Is there a story behind it?

Thanks, Theron! I think your name is pretty sweet too.

My parents named me after a character in The Sound of Music who falls in love with a Nazi. Thanks, mom and dad! I was not a huge fan of the name when I was a kid, but I love it now. 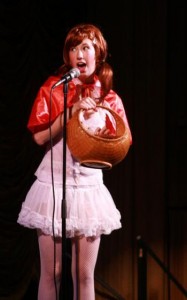 I totally understand what you mean. Let’s get a little background info on you. Where are you from? Have you always been a performer?

I was born in San Francisco but grew up in Sacramento and I have pretty much always been a performer. I haven’t really ever wanted to do anything else with my life, which feels silly to say, but it’s true. I do a lot of different artistic stuff like singing and writing and dancing, but acting has always been number one on my list, so once I can make a living doing it, I’m going to be one hell of a happy lady!

The first time I experienced the awesomeness of TFO was for their screening of Demons in 2004. I’d been hearing about them for a long time but never made it to a show, so when I finally did I was totally blown away.  Maybe six months after that, my friend Liz told me they were auditioning for their first movie, Curse of the Golden Skull, so I auditioned and got cast as an evil slumber party girl.  After filming, I was so in love with the group that I knew I wanted to stay involved any way I could, so I started volunteering and became part of the stage shows.  I’ve managed to do a lot of really cool stuff onstage with them. I was a sexy nurse who got disemboweled for Re-Animator, I was a zombie-killing anime girl for Versus, I got to play this rad disco-version of Lady Macbeth in a musical we did. They’re just the coolest gang of folks I could hope to know; they’ve totally become my second family. 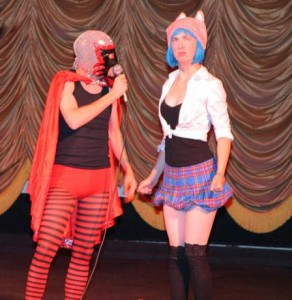 It sounds like TFO has given you the ability to use all of your talents. That’s a valuable opportunity. Do you have a favorite area of performance? The live work, the film work?

I’m not really sure yet, to tell you the truth.  I have a lot more experience being onstage.  Movie-making is freaking awesome and I’m starting to really love it, but it’s very strange when you’re used to theater. I miss being in front of a live audience after a while.

I hear you’re starring in their latest flick, Planet of the Vampire Women. Can you give me a little dirt on the production? How is it going so far?

Oh my god, I think this movie is going to kick so much ass! Planet of the Vampire Women is definitely a sci-fi movie, but with a lot of extra elements and cool twists involved. It’s basically the story of this female gang of space pirates who are pulling off a huge casino heist, and in an attempt to escape from the police, they hide on the surface of an alien planet. That’s when the shit hits the fan. People start dying, sexy lady vampires start running around. I don’t want to spoiler anything but it’s very fast-paced and action-y all the way through, and I’m really excited.  I love the experience of being in the movie, but at the same time I wish it was already done so I could watch the damn thing!

For the most part, filming has been going great … there have been a few setbacks but nothing major.  We battled this really intense heat in the warehouse where we’re filming for like a month, everyone got sick. But in general it’s going really smoothly and I’m having an amazing time.

What can you tell me about your character?

My character’s name is Ginger Maldonado. She was a Marine but she got kicked out for insubordination, so she joined up with a pirate crew. She’s the pilot of the ship at the beginning of the movie, but once things start going haywire she basically has to take charge and try to keep everyone alive. She’s really tough and very much of an action hero and also kind of a jerk—kind of the female equivalent to Han Solo but with less of a sense of humor. I get to boss people around a lot and yell and fight and run around. It’s great! She’s really fun to play, because she’s so different from how I actually am. I’m not nearly as tough as she is.

I really loved you in Monster From Bikini Beach. Did you base your character on anyone in particular?

Thank you! Most of the time when I’m doing character research, I’ll wind up with a character that is a composite from a bunch of different sources. But Fanny Jo is pretty much just her own thing. Well okay, I watched a great documentary called Okie Noodling, which is about real-life catfish wranglers, but that was it as far as actual research is concerned. A lot of the character came about from goofing off with Keith Letl while we were supposed to be rehearsing.

Never underestimate the value of goofing off! So, what’s next for you, Liesel? More TFO? I hear that you have a burgeoning career as a video restaurant critic.

Right now, my life is completely about this movie, but once we’re wrapped I’m gonna go back to L.A. and try to find more projects to get involved in. I’ve been working as a background actor, which is fun and pays the bills, but I want to make an actual career out of acting, so I’m preparing myself for a lot of auditioning when I get back in town. The TFO will always have first dibs on me, though. The restaurant thing is a one-off at this point, but if someone wants to pay me lots of money to be a video restaurant critic, I’d be more than happy to oblige them!

One last thing. My sources tell me you are involved with someone called the Thin White Duchess. What is your connection with this elusive woman?

[Laughs] Wow, you really did your research, didn’t you! Thin White Duchess is this alter ego of mine. Should I pretend that there’s no connection between us? Mmm, nah… It’s just this name I use on the internet sometimes. Maybe someday she’ll be more than that, if I ever start a performance art career, but for now she’s just my little tribute to David Bowie, who is one of my all-time favorite musicians/humans. He had an alter ego in the mid ‘70s, the Thin White Duke, who was normal looking but totally bizarre and emotionless, almost robotic. Thin White Duchess is halfway between that character and the Duchess from Alice in Wonderland.  I guess what I’m trying to say is that my alter ego is a total nutball crazy woman. Awesome.

That apple didn’t fall far from the tree, my friend…