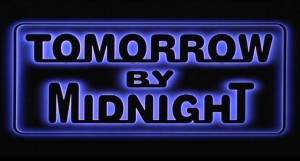 Art reflects the human experience, and film is art—at least, it is occasionally. We go to the movies to see idealized and stylized depictions of our world. And let’s face it, we live in a violent world. Violence has long been an important element of cinema. It’s a primal, visceral part of the human experience, and because of that it almost demands to be filmed. But once that happens, violence becomes commodified. This brings up several moral and ethical concerns for those that ponder such things. One of the better films I’ve seen that ponders such things is Tomorrow By Midnight, writer/director Rolfe Kanefsky’s 1999 thriller, which due to its touchy subject matter remains unreleased in the U.S.

Set almost entirely in a video store, Tomorrow By Midnight tells the story of a group of friends that set out to rent a movie and end up taking the store hostage. After an argument with the tyrannical clerk running the store, one of the friends (an arrogant film student) decides to teach the clerk a lesson and pulls a prop gun on him. Things go from bad to worse, and before the evening is over, a SWAT team has surrounded the store and the media—masters at commodifying violence—is swarming the property, looking for blood. And as we all know, if it bleeds, it leads. 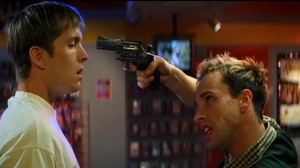 If this all sounds a bit heavy for entertainment, don’t worry. Kanefsky makes his points but never lets them get in the way of what he’s crafted: a compelling thriller filled with amusing characters and intense situations. Film buffs will love much of the dialogue, which is filled with insider references to films and directors.

The movie swings from witty to sexy to edgy, and Kanefsky handles the sudden tonal shifts expertly. Assisting him is a wonderful ensemble cast, led by Alexis Arquette as the petty store clerk. Carol Kane has a small role as a hostage negotiator and Kanefsky regular Robert Donavan shines as cop on the scene just doing his job.

That this flick isn’t better known is a shame and illustrates the role that luck plays in the movie business. Though Tomorrow By Midnight is all “kiss kiss bang bang,” it had the misfortune to be completed right around the time of the Columbine high school shootings. While all concerned knew this was a great film, the producers and distributors did not want any product featuring young adults brandishing firearms. Personally, I think a brave company might have made a small fortune with this film at that time. Of course, doing so would have raised moral and ethical concerns. But, I ask you, when has Hollywood ever shied away from commodifying violence?