Who would have thought that, all these years later, we’d still be talking about that long-haired preacher who ran around the desert with his followers. No, not that Jesus guy. I mean Charles Manson. Yes, Manson and his family have cast a spell over several generations now. And though he’s not a character in Gimme Skelter, the new film from writer/director Scott Phillips, Charlie’s presence is certainly felt.

The premise of Gimme Skelter is ingenious. What if Charlie Manson’s illegitimate son decided to follow in his father’s footsteps and start his own “family”? I mean, it almost writes itself! Throw in an awesome title and a heapin’ helping of ‘70s grindhouse atmosphere, and you’ve got a soon-to-be cult classic on your hands.

All is not well in the little town of Banion’s Cross, New Mexico. Todd (Mark Chavez) is not sure if he really loves his gorgeous girlfriend, Jonda (Jillian Parry). Just when he’s most vulnerable and confused, along comes Brass (Jaymi McNulty), a foxy little mama who turns Todd’s head with her bod and introduces him to her friends, a van full of outcasts led by Phillip Valentine (Billy Gaberina), who is convinced he’s Manson’s son. They’ve come to town on a mission.  They are going to kill as many people as they can in one night.  But Valentine soon learns that being head of a family is hard work, especially when the members are as spirited as Pajamas (Sarah Turner), a bad-ass chick that has a bit more spunk that Valentine can deal with.  Horror legend Gunnar Hansen has a small role as a man that can handle himself no matter the situation, and up-and-coming scream queen Elske McCain, who has perhaps the best line in the flick, is featured as a local “business woman” that not only goes down, but goes down swinging—think “Russ Meyer meets Jack Hill.” 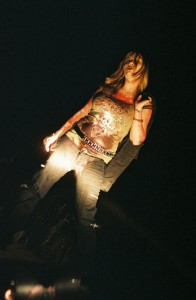 There’s a very cool opening sequence involving a blonde stripper in a schoolgirl costume who enjoys a nice bloodbath…literally.  Gimme Skelter draws a lot of effect from playing up the humorous soap opera-like situations of the townspeople and juxtaposing them against the more serious soapy problems that Valentine’s family is having. While Todd is worried about his failed relationship, Valentine is dealing with a rebellious Pajamas and an unsure Brass.  Eventually, it all mixes together in a bloody soup of murder and mayhem.

Scott Phillips has given us a kind of low-budget masterpiece with Gimme Skelter.  The plot’s twists and turns are just outrageous enough to keep us interested, and his cast is enthusiastic enough to make it all a lot of fun.  Also, the flick’s score is truly righteous.  Sure, if you do the math, Valentine can’t really be Charlie’s son, but it’s nice to dream.  And isn’t that what movies are all about?