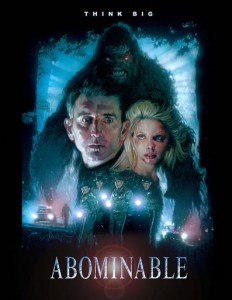 For the inaugural post in Slammed & Damned’s new semi-occasional, random, intermittent, sporadic, recurrent “Why Do I Own This?” series, in which I view a movie I own but have never watched, I’ve chosen a low-budget, 2006 flick called Abominable. I don’t even remember buying this movie, but apparently I did. Let’s see if we can figure out why it’s on my shelf.

I want to get this out of the way up front: Abominable is a bigfoot movie. But this isn’t the gentle Harry and the Hendersons sasquatch we all know and love. No sir, this ‘squatch has a taste for human flesh. He roams the forest outside the town of Flatwoods, where poor Preston Rogers (Matt McCoy) went mountain climbing six months ago. He and his wife were attempting to climb ol’ Suicide Rock when tragedy struck—his wife died in a fall and he was left paralyzed from the waist down. Now, Preston has returned to the area, with his sleazeball physical therapist Otis (Christien Tinsley), to face his fears. They are staying in Preston’s rustic stilted cabin, which sucks for him because he can’t maneuver his wheelchair up and down 10 feet of stairs. 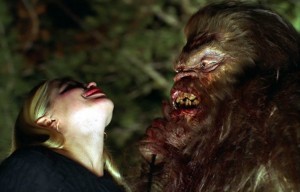 In an obvious nod to Rear Window, all Preston can do is wheel around with his binoculars and peer out the windows at the cabin across the way, which coincidentally is hosting a bevy of beautiful, boisterous young women. He also watches the woods, which are the home of the legendary Flatwoods monster. Yes, the locals love to tell tales of the bigfoot-type creature roaming the Flatwoods. Luckily for us, the locals are played by veteran actors Jeffrey Combs, Lance Henriksen and Rex Linn. Unluckily for them, they go out monster hunting one night and never make it home. It seems ‘squatch is somewhat territorial (and hungry), so he’s clearing the area of humans. It’s not long until he makes his way to the cabins. As Preston watches in horror, bigfoot begins to pick off the girls, one by one. Preston tries to warn them, but they just think he’s a pervy Peeping Tom. He tells Otis what he sees, but Otis cannot be bothered by Preston’s obvious mental problems. (I promise you that, by movie’s end, the despicable Otis will have wished he’d listened.)  ’Squatch exhausts the supply of nubile appetizers pretty quickly and sets his sights on Preston, the sitting duck in the cabin next door. Though Preston is disabled, it doesn’t mean he will be easily dispatched. Soon, it’s man against man-eating sasquatch, and only one can survive.

Abominable is the first feature from director Ryan Schifrin, son of renowned film composer Lalo Schifrin, and he keeps things moving along nicely for the first two-thirds of the film. He introduces characters, sets up the story well and builds tension. Bigfoot is introduced right away, and he’s quite frightening when he’s striking like a big, hairy ninja—appearing suddenly, allowing us to get a quick glimpse, and then disappearing into the woods dragging away his unfortunate victim. But in the third act, ‘squatch becomes a major player and we see all of him, all the time. In fact, we see him so much that he loses any effectiveness. Let’s face it, when you’re making a creature feature, no matter how gussied up it is with allusions to better films, everything rests on your creature. And though ‘squatch is nicely portrayed by a tall guy in a carpet suit, he looks a little too much like character actor Jack Elam to truly scare anyone watching. But all the other effects in the film are fine. There are two very cool kills in Abominable. One involves Tiffany Shepis, who I didn’t even know was in the flick. She doesn’t get a chance to do anything more than shower, scream and die, but she has the best death scene in the film. In an obvious nod to King Kong, she’s killed when bigfoot yanks her through a window, causing her naked body to fold over upon itself. The other cool death involves the odious Otis, who gets his face bitten off. (I told you he’d wish he’d listened.) That’s not an obvious nod to anything I can think of…except, obviously, Otis will never nod again. 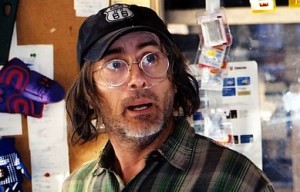 So, why do I own this? I have to guess that I bought it because it features Jeffrey Combs and Lance Henriksen. Oh, and probably because it was discounted enormously. I’ll pay to watch Jeffrey Combs in anything, and he doesn’t disappoint here. He has only a few scenes, but he’s a joy to watch whenever he’s onscreen. Another question remains: Now that I’ve (finally) seen this, will I watch it again? No, probably not—but I’m not upset that I own it. As Charlie Brown might say, it’s not a bad little film. I mean, Abominable isn’t great but it’s not, you know, abominable.

This article was posted in Reviews and tagged Abominable, bigfoot, creature feature, Jack Elam, Jeffrey Combs, King Kong, Lalo Schifrin, Lance Henriksen, Matt McCoy, monster, Rear Window, Reviews, Ryan Schifrin, sasquatch, Slammed & Damned, Theron Neel, Tiffany Shepis, Why Do I Own This?. Bookmark the permalink. Follow comments with the RSS feed for this post.Trackbacks are closed, but you can Post a Comment.