What’s the last Texas blood bath you remember? Did it perchance involve a guy named Leatherface? Well, then it’s definitely been too long. You need to hightail it over to Bellmead, TX, next weekend (November 13─15) for three days of thrills and chills at the Texas Blood Bath Film Festival, where you’ll see some of the best new short and feature-length films the world of independent horror has to offer.

Special guests will include Texas-based makeup and effects artist Evil John Mays, who will be there to present workshops and demonstrations, and horror legend Kevin S. Tenney, who will be presenting his latest awesome flick, Brain Dead, which will be followed by a Q&A. Other films being shown over the weekend include J.T. Seaton’s zombie comedy George’s Intervention; Bryan Roberts and Nolan Ball’s campy slasher flick The Green Monster; a special test screening of Kerry Beyer’s horror comedy Spirit Camp; and the world premiere of James K. Young’s grindhouse throwback The Midnight Drive-In, featuring exploitation king David F. Friedman. And on Saturday (Nov. 14), there will be a special midnight screening of Sway, Josh Vargas’ controversial horror/exploitation hybrid. 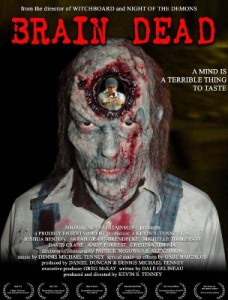 Acting as festival judges will be film critic Eve Blaack and actor/director Alan Rowe Kelly, among others. Madman/actor Parrish Randall will be hosting the weekend, and I have it on good authority that noted horror actress Michelle Tomlinson will be there in support of two of her films, George’s Intervention and Brain Dead. Also on hand will be many of the filmmakers and actors whose work will be featured over the weekend. And you definitely will not want to miss the filmmaking workshops or the autograph sessions with your favorite stars.

Of course, no festival would be complete without souvenirs, so there will be a variety of vendors on hand to make sure you get your claws on all types of horror-related swag. Tickets are $20 a day and lodging is available in nearby Waco, TX. Go check out the Texas Blood Bath website for a complete schedule of events and all the details you’ll need.

So, don’t be scared. Head on over to 3900 Parrish St. in Bellmead, TX, for a demented weekend of 100% pure independent horror film entertainment—uncut and intended to shock you beyond the realm of sanity. I guarantee it’ll be the most fun you’ll have in your (after) life.