You think an alien invasion is the stuff of make-believe? Well, look around you. Our little extraterrestrial friends seem to be everywhere these days. Let’s see, on the big screen there’s the pending Alien prequel; the upcoming Avatar; the upcoming The Fourth Kind; not to mention last spring’s Monsters vs. Aliens and last summer’s District 9, which was an allegory of apartheid. And on television, we have ABC’s remake of the 1983 NBC series V, which was an allegory of fascism. But of course the remake is an allegory of everyone’s favorite modern threat: terrorism.

This fresh crop of visitors has got me thinking about my favorite recent alien threat, which occurred on the ill-fated 2005 CBS television series Threshold. As far as I can tell, the extraterrestrials in Threshold are an allegory for the rise of technology, specifically, the internet—though in a post-911 world, terrorism is never far away. But whatever they represent in the abstract, they are badasses here and now. As the old saying goes, if (terrestrial) company is like fish, these guys are like freakin’ whales. They might be here to take our planet, but they’re doing it by taking us. Since they conveniently seem to exist in four dimensions, we never see them. But they’re attempting to rewrite our DNA using a signal that transforms us into them, and they manifest themselves by seizing control of the people exposed to this signal. 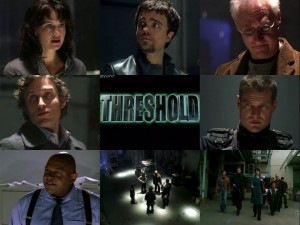 It’s the job of a crack team of specialists corralled by the government to figure it out and head off the threat. This task force is composed of characters right out of central casting. The leader and author of the Threshold protocol is the beautiful and tough Dr. Molly Caffrey (Carla Gugino). She’s aided by aging-hippie microbiologist Dr. Nigel Fenway (Brent Spiner), reprobate mathematician Arthur Ramsey (Peter Dinklage), nerdy aerospace engineer Lucas Pegg (Rob Benedict) and studly black-ops ghost Sean Cavennaugh (Brian Van Holt). They’re all managed by J.T. Baylock (Charles S. Dutton), Deputy National Security Advisor and registered hardass. If this all sounds a bit clichéd, just know that it allows a first-rate cast to work in service of smart material that is part sci-fi tale, part detective story. And no matter how outlandish the narrative gets, it always rings with verisimilitude—which is maybe the best thing that can be said about a science-fiction project.

While film is a director’s medium, producers reign supreme in television. Threshold was created by Bragi F. Schut, but the big guns are producers Brannon Braga (Star Trek: The Next Generation), David S. Goyer (Blade, Batman Begins) and Daniel Cerone (Dexter). These guys are some of the biggest names in genre entertainment these days and though Threshold has become something of a footnote in their careers, it’s no less entertaining. The series’ lack of success was due mostly to its mismanagement by CBS. Though it was well received by critics, the network shifted its time slot, moving it to Friday nights, a traditional dumping ground in the world of television. Though 13 episodes were completed, CBS aired only nine. Luckily, the whole series is now available on DVD. It’s also popped up recently on the SyFy channel, along with the original V.

So, if you want to prepare yourself for this upcoming alien invasion, don’t lock yourself in the basement or sleep in a tinfoil cap. Check out Threshold. Remember, forewarned is forearmed.