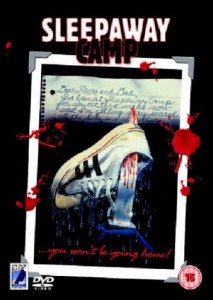 I have a confession to make. It’s a little embarrassing, but here goes. I’d never seen Sleepaway Camp until very recently. I know, I know. And I’m sorry. Although it was made way back in 1983—the Golden Age of the Slasher Film—it just got by me somehow. Frankly, I was a little nervous about finally watching it. All kinds of thoughts went through my head: I’ve heard so much about it over the years that perhaps I shouldn’t watch it. Maybe I’ve built it up in my mind so much that it wouldn’t be fair to me or the movie. Can I still like it even though I know the shocking ending? But now I can relax, confident in the knowledge that I have seen what many consider to be one of the best slasher movies ever made. Having seen it at last, I can’t really say for sure whether it’s the best slasher movie ever made, but it’s definitely one the most twisted.

Sleepaway Camp wastes no time and sets the tone immediately by starting with a tragedy. A man and his two kids, Peter and Angela, are out in a small boat one summer day. They are summoned ashore by the father’s friend when, suddenly, a speed boat slams into them, killing the father and one of the kids. Eight years later, we find ourselves in the house of Dr. Martha Thomas, the nutty aunt of the surviving child, little 13-year-old Angela (Felissa Rose). It seems Angela and her cousin Ricky (Jonathan Tiersten) are going away to camp for the summer, never a good thing in a slasher flick.

Let me say that Camp Arawak is home to some of the foremost sociopaths in summer camp movie history. Let’s see, there’s head cook Artie, who tries to rape Angela on the first day. And there’s fellow camper Judy, who’s suddenly developed boobs and definitely didn’t get enough attention as a child. And there’s counselor Meg, who acts as Judy’s toady and has a thing for much older men. Then there are the various male campers, who are all East Coast mooks and kind of run together in my mind, but trust me, they’re little delinquents with nothing but trouble in their future.

While everyone seems to hate poor little Angela, who hasn’t said a word since she arrived at camp, she does make one friend. Ricky’s buddy Paul endears himself to Angela by defending her honor one afternoon. This makes such a big impression on Angela that she actually begins to talk to Paul. Pretty soon, they’re doing everything together and, this being an ‘80s camp movie, Paul is soon (gently) putting the moves on Angela. Now, this is where it begins to get weird. While Paul is (gently) making out with Angela, she has a flashback to when she and her brother were little kids. In this memory, they are spying on their father, who’s cuddling with his nude gay lover. Yes, you read that right. Cut to little Angela and Peter in bed together, playing some kind of game where Angela is poking Peter with her finger. I hate to even think about the symbolism here. Anyway, people start to die, there’s a killer loose, blah blah blah. It all leads up to the shocking revelation of the killer—which I won’t reveal outright. But it is pretty shocking for a 1983 slasher flick. 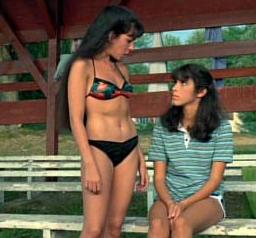 Written and directed by Robert Hiltzik, Sleepaway Camp has developed a big cult following and drawn a fair amount of controversy over the years. Certain groups have accused the film of negatively portraying homosexuality, but I really don’t think that’s a fair accusation. But it does have some pretty unusual kills in it, though I have to say they don’t always make a lot of sense. One girl is killed when a curling iron is inserted into her vagina. I can see how that would maim someone, but kill? And another character has a vat of boiling water dumped on him. He’s alive when he’s carried away, but apparently he dies. That one’s possible, I suppose. One character takes an arrow to the throat, which is a rip-off of Kevin Bacon’s death in Friday the 13th. None of the gore effects are very good, but the tiny ‘80s men’s running shorts sure disturbed me. Next to some of the performances, the clothing is definitely one the more disconcerting elements of the film.

Okay, I have another embarrassing confession to make. Slasher films really aren’t my cup of tea. Sure, I appreciate them and I know a good one when I see it, but they are never my first choice. But Sleepaway Camp is a good one and I’m glad I finally chose to see it. I understand why it has the following it does. It’s like a combination of Meatballs, Ten Little Indians, The Birdcage and The Crying Game, set in 1983, with a psycho killer thrown in the mix. I mean, how do you not enjoy that movie?