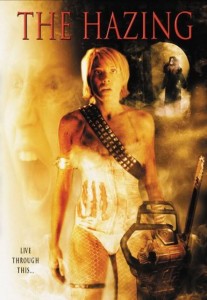 If you’re anything like me, and god help you if you are, you spend way too much time wondering why those idiots in Hollywood are constantly spending millions of dollars on horrendous luxe remakes of wonderful low-budget horror films from decades past. I know they think the name recognition will deliver a ready-made audience. But I ask you, can the title of something made in 1983 really have that much influence on today’s teenager? Rather than sully the memory of those great flicks, why don’t they just spend a little more development time—and a lot less money—to create good brand-new movies in the vein of those old flicks? It can be done. I know it’s possible because I just watched The Hazing (2004) and while it might not be the most original film, it’s definitely a lot more enjoyable than most of the stuff being released these days.

Written and directed by Rolfe Kanefsky, The Hazing recalls several movies, including The Evil Dead, Night of the Demons and Scream among others, yet it mixes all these influences in such a fun way that it never bothered me at all. Included are all the ingredients necessary for a classic scary movie: an evil college professor, an evil sorority leader, scared college kids running around a creepy haunted house, some occult mumbo-jumbo. Throw in a few not-so-special effects and add a dash of humor and you got yourself a cool little flick. 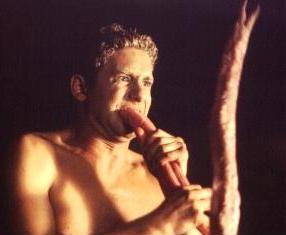 It seems that evil Professor Kapps wants to open an evil door to the evil other side, evilly. Why? What does that ever matter? All you need to know is that his evil plans involve Brooke Burke in a skimpy genie costume. Cut to a bunch of attractive college kids pledging an evil fraternity and an eviler sorority, all during one evil ceremony. Yes, I too thought these are usually separate ceremonies, but no matter. It’s all just an excuse to get the kids into silly Halloween costumes and corral them into a deserted mansion for the night, where the evil sorority leader and her less-evil frat boy toady will scare them silly. Alas, things do not go as planned. Don’t worry, though. Your viewing experience will not suffer. Blood is shed. Flesh is exposed. Chainsaws and axes are wielded. There’s even a little of what Joe Bob Briggs would undoubtedly call “Possessed Tongue Fu.”

Kanefsky is a stylish director and does a great job of keeping things moving along and delivering the requisite scares. But, his screenplay’s sly subversion of horror movie clichés is what I enjoyed the most. Among the characters are the usual suspects—the geek, the bimbo, the bitch, the smart-ass—but nobody is exactly what they seem, and Kanefsky gets a lot of laughs by playing with the stereotypes. Also, my congratulations to whoever decided Tiffany Shepis should spend the majority of the film in a form-fitting silver astronaut disco suit. Well done, my friend.

Speaking of the usual suspects, this flick is filled with actors I recognized, but from where I could not remember. (You know what I mean. Through the whole movie, you sit there and say, “Argh, where do I know that guy from?”) Let’s see, there’s Nectar Rose, who I saw in Roman; Parry Shen, who I saw in Better Luck Tomorrow; Brooke Burke, who I saw on that Rockstar reality show; Phillip Andrew, who I think I saw on The Power Rangers (no comment); and, of course, Brad Dourif and Tiffany Shepis, who we’ve all seen in everything. And while Dourif and Shepis are awesome in this film, the big surprise for me was Nectar Rose. A plucky little blonde, Rose ably delivers a gamut of characterizations and steals every one of her scenes.

So, Hollywood, if you’re reading, here’s some advice for you: Take a cue from Rolfe Kanefsky and crew. The Hazing is everything a horror flick needs to be, and it cost a fraction of what you’ll spend on The Amityville Chainsaw Nightmare on Halloween Street Part XVII: The New Beginning—Again! (aka Once More Without Feeling). It’s surprising what can be accomplished using a little creativity and determination. You should try it more often.