The Lost Skeleton of Cadavra

Of all the flicks we’ve watched during ‘50s Parody Week, The Lost Skeleton of Cadavra is the one that feels the most like an actual bad ‘50s sci-fi/monster movie. It does everything right (or wrong): the look, the feel, the dialogue, the acting. It’s all so exceedingly terrible. And that’s exactly why it’s so wonderful.

Written and shot in 16 days, The Lost Skeleton of Cadavra is a story of man’s arrogance, the greed for power and men in cheesy monster suits. Dr. Paul Armstrong and his wife, Betty, are searching for a meteor that has fallen in the mountains. He is certain it contains the radioactive element Atmospherium, which he needs to help him in his never-ending quest to “do science” and aid mankind. That evening, they observe what they think is another meteor, but it’s really a spaceship belonging to Kro-Bar and Lattis, an alien couple from the planet Marva. They are stranded on Earth and, of course, need Atmospherium to repair their ship. They also need to find their pet mutant, which has escaped and is terrorizing the countryside. The next day finds evil scientist Dr. Roger Fleming searching the same area for the lost skeleton of Cadavra, a local legend. For some reason, he wants to bring the skeleton to life and worship it. When he finds it in a cave, the extremely bad-natured skeleton telepathically orders him to locate, coincidentally, Atmospherium, necessary for the skeleton’s resurrection. And that’s just the first 10 minutes! 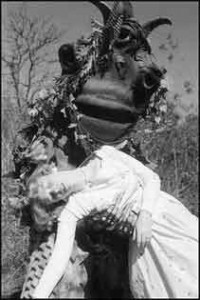 The Lost Skeleton of Cadavra is a pitch-perfect spoof of a Golden Age B movie. The filmmakers are fans of these films, and it shows. All the hallmarks of the genre are lovingly re-created here: static framing, awkward dialogue, wooden performances, continuity errors, bad dubbing and dreadful special effects. I think the actors in this film have discovered the true secret of bad acting: They don’t just play their characters; they play the bad ‘50s actors giving what are the most important performances of their lives, and giving them terribly. Maybe I’m off base, but these are the best bad performances I’ve ever seen, so I think they are on to something here. As Dr. Armstrong, Larry Blamire (also the writer and director) is a 1950s man of science, right down to his white shirt and lack of humor. All he can think of is doing science. His plucky wife, Betty, is played by Fay Masterson as the very model of an Eisenhower-era housewife. She knows her place and it’s standing by her man, while always trying to be a good hostess. Brian Howe plays the evil Dr. Fleming as the worst over-actor on the planet, laughing manically as he plots to bring the skeleton back to life. Andrew Parks and Susan McConnell, as the aliens, are indeed strangers in a strange land, hilariously trying to figure out Earth customs as they interact with the locals. And as Animala, the animal woman, Jennifer Blaire is a lot of campy fun, especially when she does her slinky dance of seduction.

For film geeks, Blamire has delivered one of the most quotable movies in recent memory. It takes a cleverer mind than you might think to give us lines such as: “Aliens? Us? Is this one of your Earth jokes?” Or, “I don’t wanna frighten you folks, but a farmer nearby was horribly mutilated, and I thought I should tell other folks, folks like yourselves, so that maybe, just maybe, you wouldn’t be horribly mutilated too.” But I dishonor the film by quoting dialogue out of context. Do yourself a favor and watch it to see how gloriously dreadful these lines are when delivered during wonderfully awful performances.

Definitely the best ‘50s sci-fi parody ever made, The Lost Skeleton of Cadavra is a movie I love dearly and continue to watch repeatedly. In fact, since I started my review yesterday, I’ve watched it four times. If you enjoy these movies, I urge you to see it…at your own peril. There’s a good chance the lost skeleton will take over your life much as he has taken over mine.