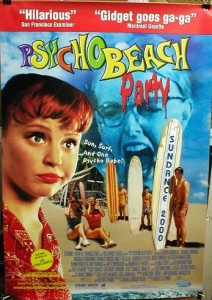 Today’s ‘50s Parody Week selection doesn’t strictly fit the parameters of the concept, but this is my site and I say it’s close enough.  I mean, there has to be some benefit to having your own site, right?

Psycho Beach Party is a campy homage to the beach party movies of the early ‘60s, but it throws in a murder mystery as well as elements of those wonderful old psychological suspense films like Marnie, Berserk and The Three Faces of Eve. The film is based on a 1987 off-Broadway play, originally titled Gidget Goes Psychotic, by prolific New York playwright/actor/drag performer Charles Busch.

Florence Forrest is our Gidget stand-in, played by the lovely Lauren Ambrose. She’s a perky California tomboy that falls in with a gang of hepcat surf bums, who dub her Chicklet. Before long, she’s riding the waves and receiving surfing instruction from the local kahuna, the Great Kanaka (Thomas Gibson). As they become friends, Kanaka learns something about Chicklet that even Chicklet herself doesn’t know: She seems to be suffering from multiple personality disorder. Whenever she receives certain visual cues, Chicklet takes on the identity of Ann Bowman, a dominatrix seemingly styled after Tallulah Bankhead. Coincidentally, whenever Ann makes an appearance, one of Chicklet’s friends ends up dead. Before long, kids are dropping like flies and the briskly efficient LAPD Capt. Monica Stark (Charles Busch) is hot on the case. 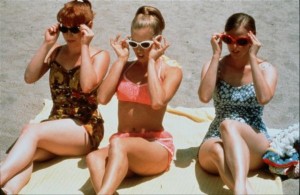 Psycho Beach Party is a wonderful spoof of the source material. Director Robert Lee King hews closely to the beach party flicks of the early 1960s. He even has the actors “surf” with gnarly waves projected behind them, just like those Frankie and Annette used to ride. And Busch has the ‘60s surf movie lingo down pat. Of course, it’s all played way over the top, with a healthy dose of gay subtext on display—especially when surfers Provoloney and Yo-Yo start with the horseplay, lovingly wrestling around on the sand in slow motion, covered in suntan lotion and provoking uncomfortable, puzzled stares from their comrades.

Ambrose is fantabulous as Chicklet and a total gas whenever she transforms into Ann Bowman, strutting around like a drag queen, issuing ultimatums and eating up the scenery. And Busch’s clever Capt. Stark is very entertaining. He plays her as a cross between Susan Hayward and Eve Arden. A young Amy Adams turns up as Marvel Ann, a bikini-clad man-hunting minx who knows exactly what she wants and just how to get it, and Nicolas Brendon (Xander from Buffy the Vampire Slayer) appears as Starcat, the complicated young hero that threw away a career in clinical psychology to ride the wild surf. 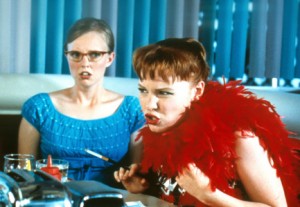 Psycho Beach Party isn’t a horror movie per se. There’s no real violence in the film, but dismembered body parts do turn up on the beach and weapons are brandished. A spirit of vintage fun permeates the proceedings throughout, with a cool score full of surf music adding to the atmosphere. There’s even a dance-off on the beach accompanied by the bemasked surf band Los Straightjackets. The flick is a spiritual cousin of The Rocky Horror Picture Show—if you enjoy that film you’re going to enjoy Psycho Beach Party.

This is an exceedingly fun movie, but you have to enjoy campy kitsch. (Or is it kitschy camp? Whatever.)  If you do, then I suggest you sit back, light your tiki torch, grab a pina coloda and prepare to have a few laughs with Chicklet, Kanaka and the gang. As the film’s tagline says: Party till you drop. Dead.