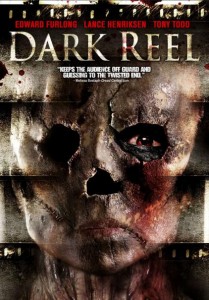 I really don’t know where to start with Dark Reel (2007), directed by Josh Eisenstadt and written by Eisenstadt and Aaron Pope. I’d like to think that this is one of those movies that looked good on the page, but got lost in translation to the screen. But that would ignore the fact that although this flick starts well, it totally falls apart as it goes. I chose this film for review based on its Netflix description and its cast. This is where I went wrong. If I’ve learned anything over the years, it’s that an intriguing summary and an appealing cast do not guarantee a good film. But over and over, I make this same mistake, never to learn. Perhaps that’s what it is to be a fan. But perhaps that’s what it is to be a fool.

Maybe I can get a handle on this movie if I break it down into its parts. Let’s begin with the plot. In 1953, a young starlet named Scarlett May was murdered. In 2006, it seems her killer is back, terrorizing the cast and crew of Pirate Wenches, an awful low-budget film from the unctuous Connor Pritchett (Lance Henriksen), owner of a floundering studio. Fanboy Adam Waltz (Edward Furlong) has won a walk-on in the film, which stars B-movie queen Cassie Blue (Tiffany Shepis). Who could the killer be? Could it be the creepy paparazzo that seems to be at each crime scene? Maybe it’s the film’s director, who seems to resent Pritchett’s meddling? Is it a coincidence that as cast members begin to die, Adam’s role gets bigger and Connor Pritchett’s movie gets more publicity? Yes, red herrings abound as this confused feature stumbles to a close. Unfortunately, you’ll have to sit through the whole 108 minutes to find out the murderer’s identity. 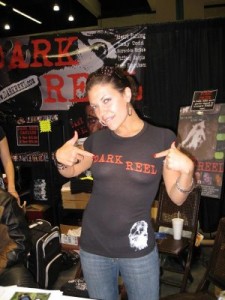 Let’s move on to the performers. Admittedly, for me this flick’s biggest draw was Tiffany Shepis. The reigning queen of the scream and B-movie goddess, Shepis is also the hardest-working and best low-budget actress out there. Hell, according to IMDb, she has 20 films in various stages of completion right now. Since she got her start as a teen in 1996 working as a regular in Troma films, she’s amassed a staggering 88 credits. And while Shepis knows what sells B movies and is a good sport about making with the gratuitous nudity, she is often the best actor in any of her films. In the recent Bonnie & Clyde vs. Dracula—which I plan on reviewing soon—she does the best work of her career. In Dark Reel, Shepis is essentially playing herself, and one scene in particular must’ve hit home for her: In an argument with studio-owner Connor Pritchett, Cassie Blue lets him know that she’s the only reason any of his crappy movies make any money at all. Replace Connor Pritchett with Troma head Lloyd Kaufman and you very likely have a scene from Shepis’ life.

I suppose the producers needed a big name for their film, so they hired Edward Furlong. I mean, he was in Terminator 2, and that was a big one…in 1991. And now, Edward Furlong is a big one. I don’t mean to be mean, but in Dark Reel he looks like he ate a Volkswagen Beetle. Eddie baby, what happened? That aside, I’ve never cared for Furlong. His acting is one-note at best (he plays whiny and weasely quite well). He’s no different here. Oh well, at least he’s still working.

On paper, the supporting cast in Dark Reel is what sealed the deal for me. I’m always eager to see Lance Henriksen in anything. Even his very brief uncredited cameo in Jennifer’s Body made me sit up and smile. But here, he makes me wince and look away. Although he does what he can with this badly written role, it’s still painful to watch. He has a few good moments and his character plays a large part in the story, so I’m sure it was a gig he couldn’t turn down. Henriksen is almost 70 years old now and I was going to say his career must be slowing down but, again according to IMDb, I see he has 10 projects in the works at the moment. Go Lance!

Appearing as the detectives assigned to the case, Tony Todd and Rena Riffel are both great in the limited amount of screen time they receive. Todd is a veteran character actor best known for the Candyman films. Riffel is probably best known by trash film fans for her role in Showgirls. She’s also made a bit of a splash with her recent cult film, Trasharella—which I also plan on reviewing soon. As partners in Dark Reel, they complement each other winningly. I’d like to see their characters get their own movie. I’m sure it would be better than this one. 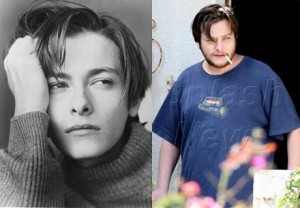 All I can really say about the film’s direction is that it’s inconsistent. Josh Eisenstadt has given us some nice images, but the film itself is a jumble of confused storytelling, inconsistent performances and wavering tone. Again, if it’s not on the page, it’s not going to end up on the screen.

Okay, breaking it down into pieces didn’t help me at all, but maybe it helped you. Wow, I’ve blathered on for more than 800 words trying to work this out, so it’s definitely time to wrap up. According to the marketing copy, Dark Reel promised a “ticket to terror.” But what I got was a ticket to boredom, with a layover in disappointment and a connection to frustration. With low-budget horror films, you pay your money and you take your chances, but that’s not really the trip I wanted to take. Of course, the real question is, am I going to make the same mistake again? You know what they say: once a fool, always a fool.